#EndSARS protesters are holding a candlelight procession at the Unity Fountain Abuja, in honour of victims of extra-judicial killings.

The protesters on Friday started the session with Christians and Muslims praying for the souls of those that have been killed by men of the Special Anti-Robbery Squad (SARS).

After the prayers, the protesters sang the National Anthem in respect of the country.

This is the 10th day since the youths began taking to the streets and despite efforts by the government to quell the protests, it appears to have gained more momentum.

On Sunday, the Inspector-General of Police, Mohammed Adamu, announced the dissolution of the unit SARS, which is at the centre of the protests. 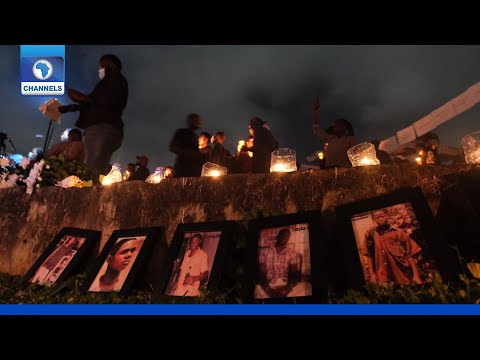 Days later, the IGP, set up a new unit called the Special Weapons and Tactics (SWAT) Team, to replace the disbanded SARS.

Shortly after the new development, a new movement – #EndSWAT dominated the trends as many Nigerians believe that a mere change of name is not the solution to the problem.

The protesters have, therefore, defied all efforts to stop them and are bent on continuing until all their demands are met.

Some of the demands include releasing all arrested protesters, justice and compensation for families of victims, the creation of an independent body to oversee the prosecution of officers (within 10 days), psychological evaluation of disbanded officers before redeployment, and the increase of police officers’ salaries.

While the police appear to be making some effort, many Nigerians feel it is not satisfactory.

Beyond setting up a new unit, prospective members of the new team are expected to undergo a psychological and medical examination to ascertain their fitness and eligibility for the new assignment.

See Photos Of the Candlelight Vigil Held In Abuja on Friday Night: