Abike Dabiri-Erewa, chairman of the Nigerians in Diaspora Commission (NiDCOM), on Thursday, stirred controversy on social media following a tweet in which she claimed that the abducted students of Government Science Secondary School, Kankara, have been rescued.

Gunmen had attacked the school on December 11, after which Aminu Masari, governor of Katsina, had declared 333 students missing.

Seventeen of the students were said to have been found on December 14.

In a now-deleted tweet, Dabiri-Erewa claimed that the 333 students had been rescued, and praised the President Muhammadu Buhari administration for ensuring the safe release of the schoolboys.

“Yaaay. The 333 boys captured in Katsina have been rescued. Allhamdullihah! @MBuhari administration has brought back our boys. #BringBackOurBoys.Our boys are back,” Dabiri-Erewa wrote. 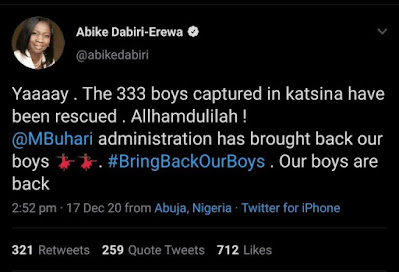 Meanwhile, a video by Boko Haram published by NigerianEye  on Thursday showed some of the abducted Kankara schoolboys crying for help.

Following the backlash, the NiDCOM chairman had claimed the screenshots were taken from fake twitter handles.

“Not my twitter handle. There may be fake ones out there,” she wrote in another now-deleted tweet.

Amidst the controversy, she later tweeted that the post on the rescue of the Kankara schoolboys should not be credited to her, adding that she lost control of her social media accounts “in the last couple of minutes”.

“Pls don’t credit any post on Katsina boys to my Twitter handle. I lost control of my handle in the last couple of minutes, along with my Instagram. I have recovered and changed my password,” she wrote.

Pls don’t credit any post on katsina boys to my twitter handle. I lost control of my handle in the last couple of minutes, along with my Instagram. I have recovered and changed my password

Here are some comments:

At exactly 3:26pm, you credited the Katsina boys’ tweet to a fake account as seen in the screenshot below. You’ve gone ahead to delete this tweet as well. Shameless liar. pic.twitter.com/tqsIgxSWOj

After Abike Dabiri unsuccessfully lied about their release, and further lying she was hacked;

Boko Haram confirmed 523 boys were abducted and here is the video confirming their claim showing some of them.

RT this video for the whole world to see how helpless we are in Nigeria. pic.twitter.com/0Pg57nFz8y

I just heard via @bbchausa BBC Hausa service that Abike Dabiri @abikedabiri confirmed the release of 333 abducted Kankara students. Suddenly, now realize that the account was not under her control.
People should be ware and warned. https://t.co/xoY8TVzkFR

All in less than 20 minutes.
This is Nigeria

If @abikedabiri tweeted and later realised this wasn’t true and deleted it, let’s free her. The government itself is filled with pathological liars, within the last 5yrs, they announced the killing of Shekau over 3 times & also defeated Bokoharam severally. #BringBackOurBoys pic.twitter.com/n1iN1lpYWR

So the person that hacked your account is Using Iphone and also in the same Location with you? pic.twitter.com/4dDLxYggKm