An obstetrician has taken to social media to narrate how one of his patients almost lost her life after she declined to undergo cesarean section (CS) over her belief that the surgical procedure is demonic.

In C-section, a pregnant mother is delivered of her baby through an incision in the woman’s abdomen, which is often performed because vaginal delivery would put the baby or mother at risk.

On Monday, the Lagos-based medical practitioner took to his Twitter page to decry the practice of declining CS among Nigerian women over religious sentiments, some of which have frowned at the procedure in favour of “faith”.

The doctor — who simply identified as Nelson (Sports_Doctor2) — narrated how his patient laboured for two days and almost lost her baby over her refusal to go for CS.

“She was told delivery by CS was demonic. So when she laboured for two days no way, they took her to the church! She was closed to giving up when they rushed her to the hospital and that was the moment I was about leaving to watch a Chelsea match. Upon examination, I found she was having Cephalo Pelvic Disproportion (CPD),” he said.

“Meaning the baby’s head is bigger than the woman’s pelvis. There is no prayer or anointing oil that would get that baby out! Another thing was the unborn child’s heartbeat. The normal unborn baby’s heart is around 120-160 beats every minute. When it’s above 160 beats per minute, the baby is in trouble! We call it fetal distress. I checked twice.

“I was getting 192 beats per minute, we had to operate on her immediately but no cash. No money, no deposit, not a single item was brought to the hospital, a specialist private hospital! I had already placed her on oxygen to help the child while we still see if they could drop anything at least because she needed an urgent caesarian section!

“Saving that baby was 50-50 and I really didn’t want to celebrate my Christmas with bad news, at a point, the manager said let’s refer as they were not forthcoming. But after a while, they brought 1/10 of their deposit and I leveraged on that. We entered the theater. We opened up immediately and what we saw was an almost dead baby.”

Nelson said the pregnant lady later agreed to CS after all the difficulties — at which point her baby was almost dead.

“My spirit was down but thank God for the nurse on duty. She started resuscitation, my eyes were clearly on them even as we worked on closing the woman up to avoid bleeding. ‘Staff, how far’ I asked again. ‘Chief, nothing’ she replied and my spirit sank. Omo, I started praying and the nurse didn’t ever give up!” the doctor further wrote.

“For more than 30minutes, she went from suctioning to everything in the book. Even mouth to mouth with oxygen in the baby’s nose. Still nothing. Yet she continued! We noticed the baby’s colour started changing from dark purple that showed no oxygen in her body to pink that showed oxygen was coming back. 45 minutes later, baby gave a cry!

“That was a welcome back to life! Immediately, I started singing. Omewo ya (He has done it). Those that could sing joined. Others just danced along and baby and mother are doing perfect! After, I bought everyone drinks; hugged that nurse that didn’t give up. ‘Staff, God bless you!’ They are yet to pay another dime but it’s well. God has done it.

“My ‘Duduke’s on the TL rebuke every pastor that tells you CS is demonic. They want to kill you! CS doesn’t make you less a woman, mean you’re lazy to push, or you’re not a Hebrew woman. The most important thing is childbirth is that mother and child are safe! If it’s vaginal delivery, good. If it’s CS very very good.”

Ending his narrative, Nelson went ahead to state that there shouldn’t be any animosity among nurses and doctors. “We’re partners. Good nurses make work easier for the doctor and together we make the work smooth,” he added. 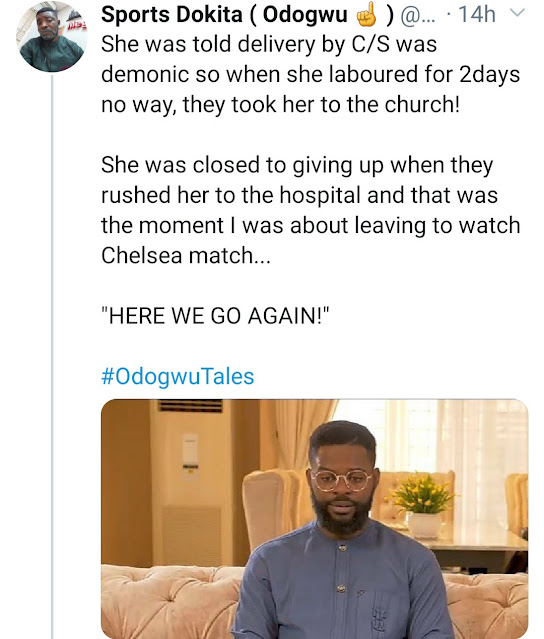 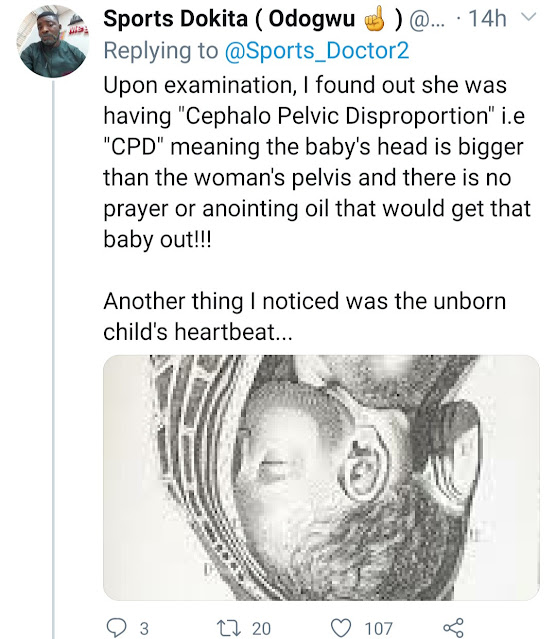 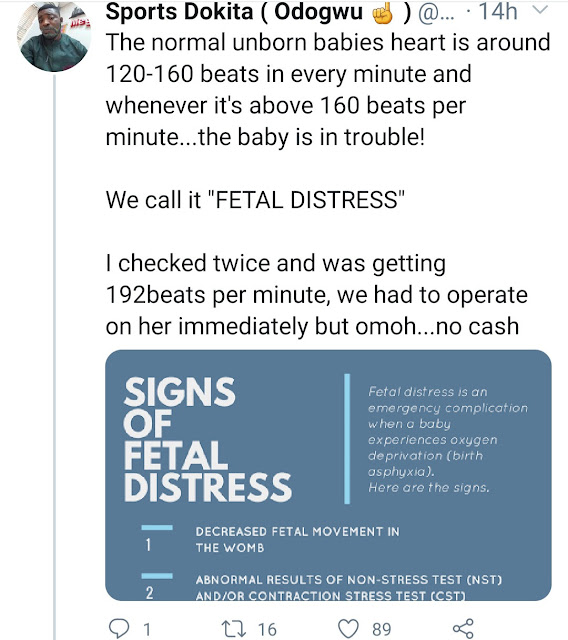 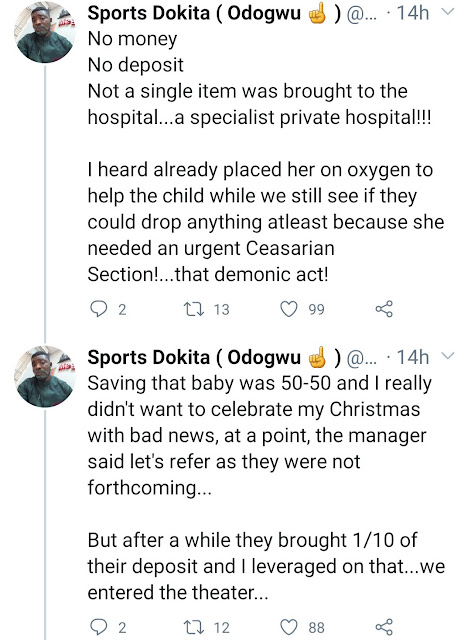 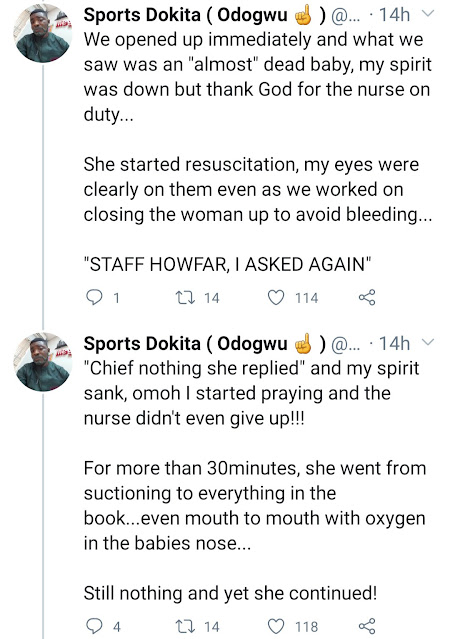 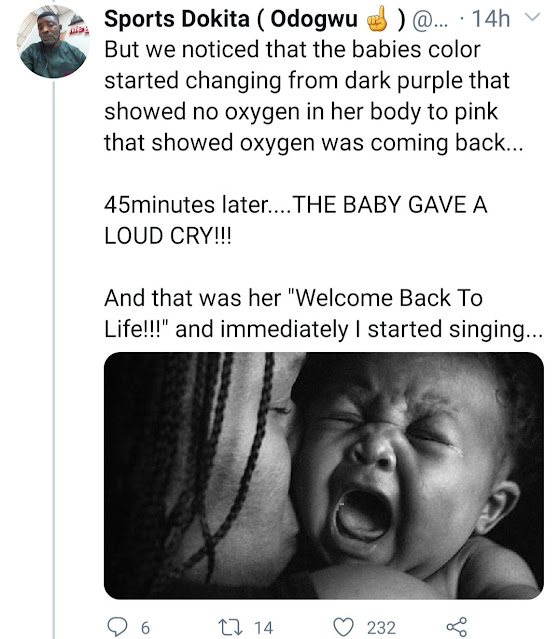 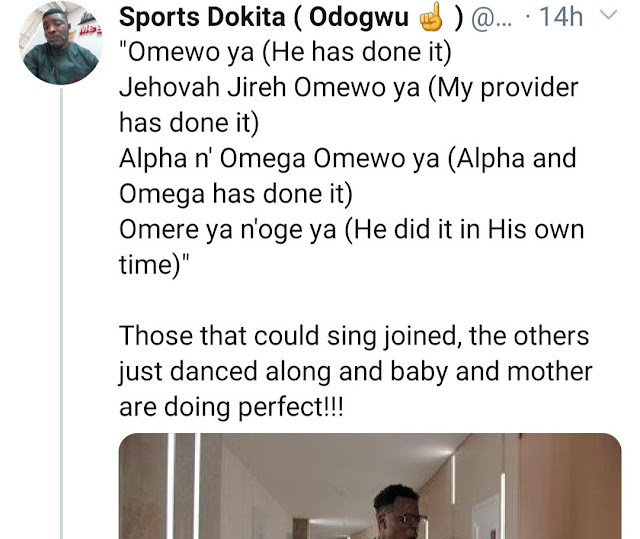 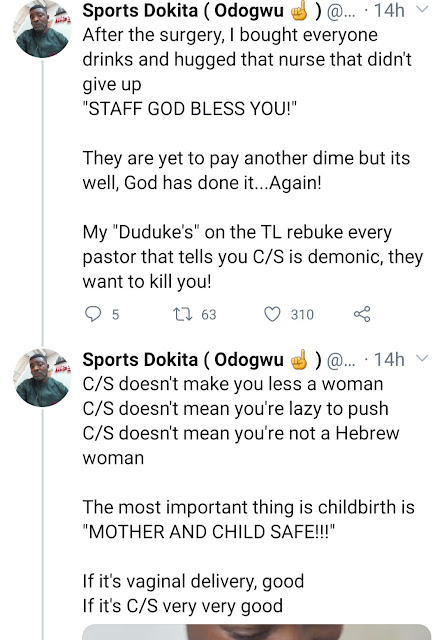