Nigerian Army on Sunday slammed former Ekiti State governor, Ayodele Fayose, over his claims that the Boko Haram terrorists recently captured a military base in Borno.

Fayose had said this vindicated his belief that President Muhammadu Buhari lacked the capacity to rule Nigeria.

“Less than 4 days after President Buhari gleefully told Nigerians that the security situation in the North-East under him is better than what it used to be, terrorists attacked and captured a Military Base in Borno State!

A whole Military Base captured by terrorists,” Fayose stated on Saturday.

“Isn’t this a “job well done” by the President and his obsolete Service Chiefs? They are indeed “doing well for keeping the country safer than the President met it.

“Now Nigerians can appreciate why I insisted in 2015 that Buhari lacked the needed capacity to rule Nigeria.

“As for Nigerians, we are all on our own waiting for God’s deliverance from these taskmasters.”

Reacting to the tweets posted by Fayose, Nigerian Army labeled him a “purveyor of fake news.” 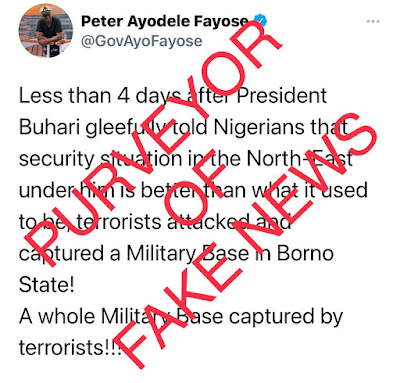 A statement signed by Brigadier General Sagir Musa, Director of Army Public Relations, said the troops of Operation TURA TAKAIBANGO in conjunction with the Air Task Force Operation LAFIYA DOLE effectively destroyed 7 Boko Haram/ISWAP terrorists’ gun trucks and decimated several unconfirmed numbers of the terrorists when they attempted to attack their location at the outskirts of Marte in Marte Local Government Area of Borno State.

He added that the gallant troops, based on reliable information about the attack, had positioned themselves in an ambush site and awaited the arrival of the terrorists before they opened fire which led to the fierce battle that resulted in the successes recorded.

He said the troops are still engaged in the pursuit of the fleeing terrorists for further exploitation.

He, however, urged the public to disregard “purveyors of fake news”.