Former U.S. First Lady Melania Trump has sparked rumours of an impending divorce from Donald Trump, after she was caught on camera strolling away from him on landing in Florida.

According to reports, the cameras caught her avoiding Trump moments after Air Force One landed in Palm Beach, Florida, on Wednesday.

Trump had stopped to pose for photos. As reported, he stood still, waved and smiled.

But his wife could be seen giving an apparent grimace as reporters began shouting questions.

She kept on walking away, in her new dress, different from the black ensemble she wore at Joint Base Andrews in Prince George’s County, Maryland.

In Washington, she wore a somber black Chanel to mark her husband’s farewell ceremony. 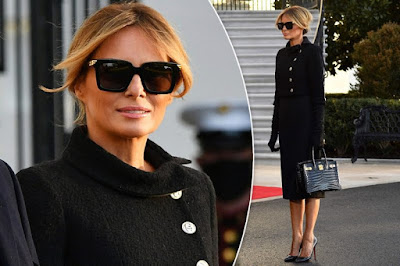 But on landing in Palm Beach, she was decked in a bright orange, navy and cream Gucci kaftan.

She has previously admitted using her clothes to send out messages, with many speculating Mrs Trump was delighted her time in the spotlight had finished.

The Trumps have moved into their Mar-a-Lago country club in West Palm Beach with 14 year-old son Barron.

Reported metro.co.uk: At least one former aide expects the couple to divorce in the coming months, although others insist the Trumps’ marriage is rock-solid.