Some staff of the National Identity Management Commission, NIMC, have been discovered to be allegedly selling forms for NIN registration in Makurdi, Benue State.

The forms are sold to applicants at the rate of N500 each at the NIMC head office on Jonah Jang Crescent, Makurdi, Benue State.

Our correspondent observed that copies of the forms applicants are compelled to purchase are stamped with the signature of a NIMC staff while the one without those appendages are rejected.

A resident, Ahijo Ahire whose son was asked to obtain the form at the rate of N500 despite having the one given to him earlier corroborated our correspondent’s observation. 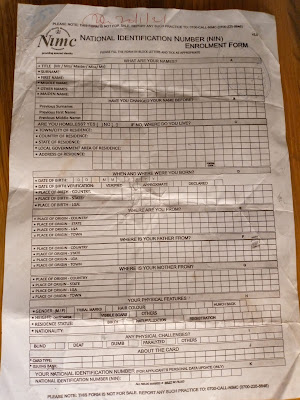 Trying to further confirm this allegation, our correspondent purchased the form for N500 from a NIMC staff who would not identify himself.

Applicants are made to queue up in front of one of the offices where they are ushered in to pay the money for the NIN form.

Speaking with our correspondent, Ahire said: “My name is Ahijo Ahire, there are many people at the NIMC office in Makurdi waiting to buy the form and collect their printout.

“It’s true people are paying money to get the forms. I brought my son here with a form gotten free from this NIMC office sometime ago and when he submitted it, they refused to accept the form. I then approached one of their staff who refused to disclose his identity. He told me that though the form was from them, it was not stamped, and that the date and numbering on the form was not there. He said without those three things, your form can’t be collected.

“From what I heard, they are selling the form at N500. They are also collecting N1000 for capturing. They are not giving any receipts for this money and that is why I want to see their boss and ask him why the form is being sold when the appendix says the form should not be sold and that when you witness any of such practices, call the NIMC office in Abuja.”

Corroborating Ahire’s story, another resident simply identified as Sonia said: “When we came, they said a form was for N500, so we had to pay in order to get it. After getting the form, we filled and submitted. At the point of submission, we still paid another N500, and not receipt was issued for the payment.”

A staff of NIMC who confirmed the development to our correspondent explained that the N500 was not to ‘buy’ but to “obtain the form.”

The NIMC staff who refused to disclose his identity said: “You only obtain the form with N500, you are not buying it. That money has no receipt and it’s used to run our generator here.

“You don’t need to pay any penny. If anybody asks you for a penny apart from the N500, don’t give and see there are some people who are in a hurry, they may decide to pay more.”

But reacting to the development, the Head of NIMC Corporate Communications, Kayode Adegoke said, “At several fora, we have said as a responsible Commission that our tolerance to corruption is zero.

“We have provided a website where applicants can go and download the form, fill and return or possibly do a pre-enrollment online, print out the two codes and bring it to the center. We have never asked anybody to sell any form for N500 and we will never.

“Also, I have been informing Nigerians that when you get to our enrollment centers, don’t pay any money when asked, take the picture of those asking and report,” he said.