Nigerian singer, Banky Wellington, also known as Banky W has blasted the Muhammadu Buhari led administration for making citizens register for NIN despite the recent spike in coronavirus cases reported in the country.

The singer who took to his Twitter account to lament the lack of social distancing among citizens at various NIN centres said the Federal government was irresponsible for making people scramble for NIN numbers while the country fights deadly pandemic.

According to him, people are being exposed to the same virus that has been taking the lives of many all because of NIN registration.

He, however, urged the Federal government to do something about the situation or put an end to it.

“How they can tell us to do social distancing on one hand and then use this NIN madness to expose all of us to covid?

“This is completely responsible for the Federal Government and to us as a country, to insist on this mad scramble for NIN numbers in the middle of Covid’s 2nd wave. People are dying.

“We should be smarter, wiser and than this for goodness sake.

“In the middle of the pandemic, this is how our Nigerian Government has its citizens queuing up to get their NIN numbers.

“Completely reckless, inconsiderate and dangerous. Then tomorrow the NCDC will release covid infection rates and say social distancing. This country sha,” he wrote.

Recall that the Nigerian Communications Commission (NCC) had told telecommunications companies to block all unregistered SIM cards in the country in two weeks.

Customers of all networks were told to register with their National Identity Numbers (NIN) or risk losing their numbers. 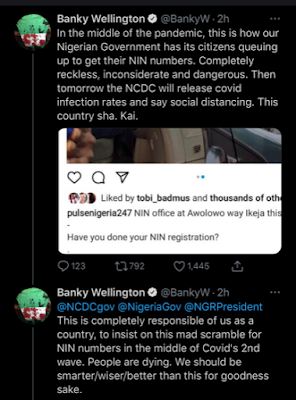