Presidential campaign posters bearing the name and pictures of the Rivers State Governor, Nyesom Wike, have surfaced in the Federal Capital Territory, Abuja.

Wike, a member of the Peoples Democratic Party, is serving his second and final term of four years as the governor of the South-South state.

Our correspondent sighted the posters that are in two different types in Abuja on Monday morning.

They were posted in strategic locations on the popular Herbert Macaulay Way in the Central Business District of the FCT.

Some were seen pasted on the fence of a building that served as the Buhari/Osinbajo Presidential Campaign Office in 2015 and 2019.

Some others were seen posted close to the headquarters of the Nigerian National Petroleum Corporation and also opposite the Nigeria Defence College popularly called War College.

According to the inscriptions on the posters titled “Rescue Nigeria 2023,” they were produced by the National President of Rescue Nigeria Movement, Jingiri Bala Mato.

Our correspondent noticed that the governor’s first name, Nyesom, was wrongly spelt as “Nyemsom” in the two different posters.

One of the posters bears the picture of the governor in the traditional South-South wear with a bowler hat to match, while he was dressed in a Northern outfit with a cap to match in the second poster.

There has been speculation that Wike may be considering a joint presidential ticket with his Sokoto State counterpart, Aminu Tambuwal, for the 2023 election. 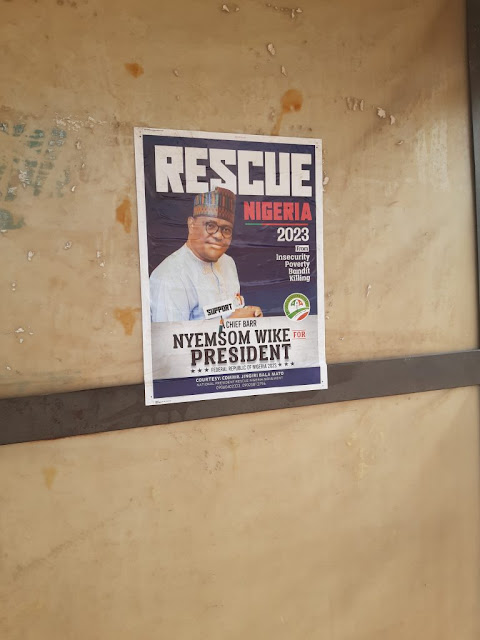 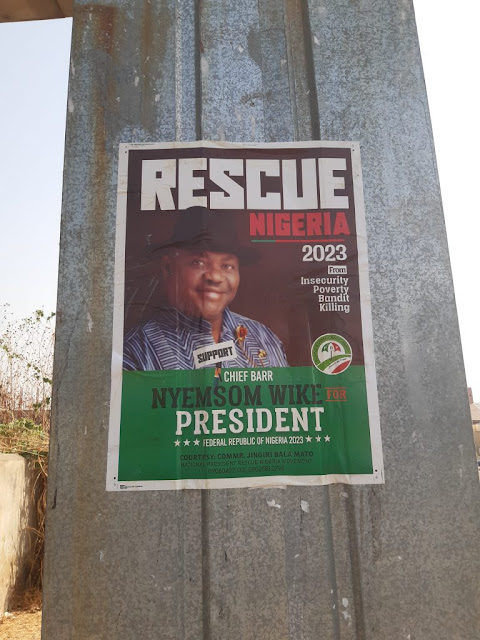 Tambuwal, who is also serving his second and final term as the governor of the Northern state on the platform of the PDP was one of those invited by Wike to inaugurate some projects in his state recently.

He contested for the PDP’s presidential ticket for the 2019 general election and lost to former Vice President Atiku Abubakar.

Wike had also last week pledged a donation of N500m to victims of the market fire in Sokoto State.

The pledge attracted criticism to the governor from opposition political parties and others.