Popular comedian Debo Adebayo, also known as Mr Macaroni, has been arraigned before a mobile court.

“He (Mr Macaroni) and others have been arraigned before a mobile court. I will release a statement on it shortly,” he said in a phone interview.

Mr Macaroni was arrested on Saturday for protesting at the Lekki toll gate where he demanded that justice be served to the victims of the October 20 2020 #EndSARS protest at the toll plaza.

He and 30 other #OccupyLekkiTollgate campaigners were arrested and detained by the operatives of the Lagos State Police Command.

In the charge sheet seen, they were charged on three counts including failing to comply with the “Quarantine Law which prohibit any social gathering to avoid spreading and contacting of Coronavirus Disease”.

The other charges are “breach of public peace, harassment, and causing unnecessary alarm to the public”. 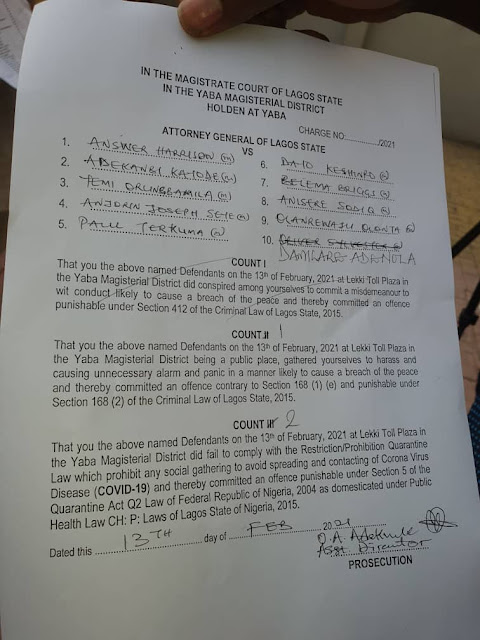 According to the charge sheet, the police said the protesters “did conspire among yourselves (themselves) to commit a misdemeanour to wit conduct likely to cause a breach of the peace and thereby committed an offence punishable under Section 412 of the Criminal Law of Lagos State, 2015″.

The second count on which they were charged also states that the protesters gathered themselves, “to harass and cause unnecessary alarm and panic in a manner likely to cause a breach of the peace and thereby committed an offence contrary to Section 168 (1) (e) and punishable under Section 168 (2) of the Criminal Law of Lagos State, 2015.”

The protesters were also charged with failure to comply with COVID-19 law recently passed by the federal government.

Many civil rights organisation including Amnesty International have demanded the release of Mr Macaroni and the other detained protesters.