Morgan, received a backlash on Twitter after saying he ‘didn’t believe a word’ of Meghan Markle’s interview with Oprah interview where the Duchess said she felt like committing suicide.

Alex said: “Meghan is entitled to cut you off. Has she said anything about you since she cut you off? I don’t think she has. But you continue to trash her.”

At this point, the 55-year-old host walked out on air saying ‘I’m done with this’ after being challenged by Alex on his position on Meghan and Harry’s situation.

ITV announced that Mr. Morgan has quit the hugely popular ITV show which he co-hosts with Susanna Reid hours later.

The statement read: “Following discussions with ITV, Piers Morgan has decided now is the time to leave Good Morning Britain.

“ITV has accepted this decision and has nothing further to add.”

This brings to an end Piers Morgan’s six-year-long association with the breakfast show, which he initially joined as a guest host in 2015. 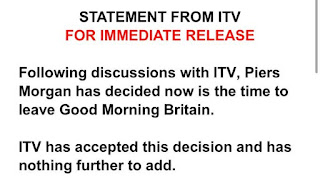