The Prelate of the Methodist Church, His Eminence, Dr Samuel Chukwuemeka Kanu Uche, JP in his sermon thanked God for keeping the celebrant hale and hearty at the age of 60.

He said Most Revd Chibuzor Raphael Opoko is an epitome of great qualities whom he also described as a generous, diligent, industrous and transforming agent of God whose life of humility has made him stand out from the crowd.

The Prelate said the celebrant has served God and humanity and touched lives through his humanitarian approach to his flock and the people.

He prayed that God add more fruitful years in sound health to the celebrant.

In his vote of thanks the celebrant, His Grace, Most Revd Chibuzor Raphael Opoko thanked God for his mercies, love and steadfastness to him and his family, testifying that he is healthy to celebrate his Diamond Jubilee which could only have been made possible by the Almighty God.

He specially thanked the Speaker of Abia State House of Assembly, Rt Hon Engr Chinedum Enyinnaya Orji for coming to celebrate with him and prayed that God sustain and lift the Speaker in all his endeavors.

The train of celebration moved to the International Conference Center, Ogurube Layout, Umuahia, where the guests were treated to a reception.

The celebrant cut his Diamond Jubilee Anniversary cake amidst cheers and prayers from those present. 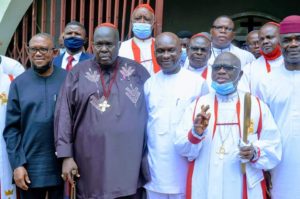 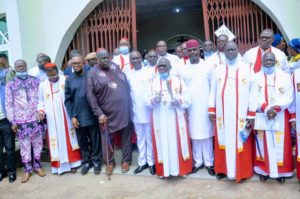 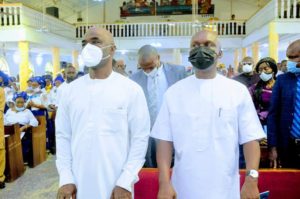 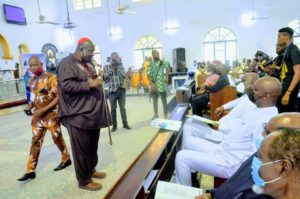 Abia Speaker Extolls Hon Ukeje’s Political Prowess, Says PDP is Back to Life in Abia North with Her Return

With Ukeje’s Return, PDP will Bounce Back in Bende – Ikpeazu