The body of an unidentified man was found in the landing gear compartment of a plane that arrived in Amsterdam’s Schiphol Airport from Lagos, Nigeria on Monday.

It also said an investigation into the man’s identity and cause of death after he was discovered inside a wheel arch have begun.

“We are investigating the discovery of a body in the landing gear of an airplane that arrived from Lagos, Nigeria.

“ The victim is a stowaway and was killed by the low temperatures during the flight.

“The Schiphol airport police unit and forensic investigators are working on establishing the person’s identity and cause of death,” the tweet said.

NIS spokesman, Sunday James, said that the report was made by the master of the vessel about 156 nautical miles off Lagos shoreline. 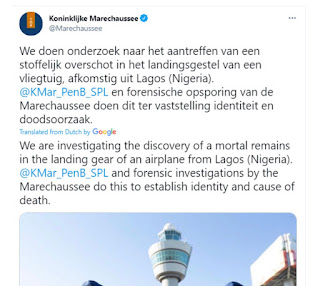