The member, House of Representatives, representing Ede North, Ede South, Egbedore and Ejigbo Federal Constituency of Osun State, Bamidele Salam has noted that the media handlers of the presidency have become very ‘cheap’ in the way they have been communicating the thoughts of President Muhammadu Buhari on issues to Nigerians with regard to the recent surge in insecurity, hyper-inflation and other economic woes bedevilling the country.

According to the journalist turned legislator, the public responses of the numerous presidential spokesman are often inelegant, verbose and disrespectful to the feelings of the generality of peace loving Nigerians.

Bamidele noted that ”not even the office of a local government Chairman deserves that kind of public communication strategy.”

Recently, the responses of Femi Adesina and Malam Garba Sheu; both Special Adviser and Senior Special Assistant on Media and Publicity to the president have drawn negative reactions from a cross-section of Nigerians.

Things have not gone down well even as Malam Garba Sheu has come out in defence of the Minister of Communication and Digital Economy, Dr. Isa Pantami and asking Nigerians to forgive him for his last comments in support of terrorism.

This follows the calls by Nigerians for the resignation of the Minister of Communication and Digital Economy over his views on terrorism.

While Dr. Pantami has not publicly apologized, he has, however, acknowledged that he made those statements as a student who was not in tune with what was happening internationally as at the time those statements were made. 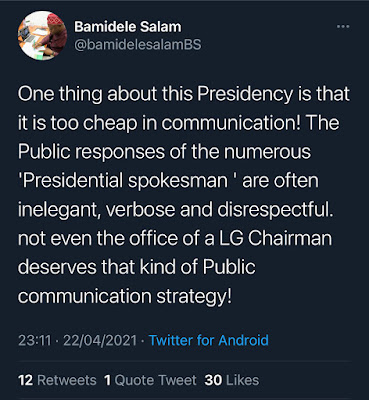