The suspension was contained in a letter signed by the Permanent Secretary of the Ministry of Local Government and Chieftaincy Affairs, Deacon J. C Nwanju and made available to newsmen on Saturday night.

The Abia Monarch, Eze Ibezim was suspended from office over alleged high handedness, intimidation and insensitivity to the plight of his subjects.

Ibezim was also accused of changing the name of the autonomous community without the required process. 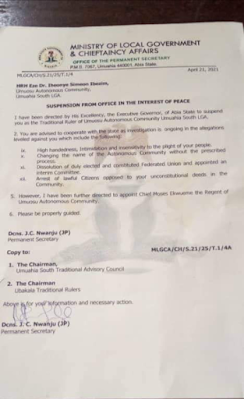 He was further accused of dissolution of duly elected and constituted union and appointed an interim committee, and as well as unlawful arrest of the citizens opposed to his unconstitutional deeds in the community.

According to the letter, “You (Ibezim) are advised to cooperate with the State as investigation is ongoing in the allegations leveled against you.”

The release further stated that Governor Ikpeazu has approved the appointment of Chief Moses Ekwueme as Regent of Umuosu Autonomous Community until the conclusion of the ongoing investigation by the State Government. 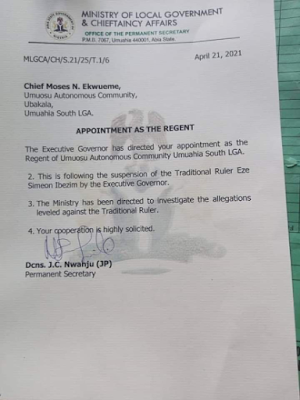