Super Eagles striker, Victor Osimhen, has hit back at Nollywood actress, Uche Jombo, after she expressed her desire for Cristiano Ronaldo to play in the Champions League next season.

Osimhen’s Napoli and Juventus are locked in the race to finish in top four.

The fight will go down to the wire with Napoli currently occupying the last spot with 76 points, while Juve are fifth with 75 points.

Ronaldo and co are away at Bologna on the final day, while Napoli host Verona.

“Kai. I want CR7 playing UCL next season. Love him or hate him…. There’s something he brings,” Jombo tweeted.

Osimhen, who has been in fine form for Gennaro Gattuso’s side, replied: “No wahala Aunty Uche. Me sef wan play UCL o.” 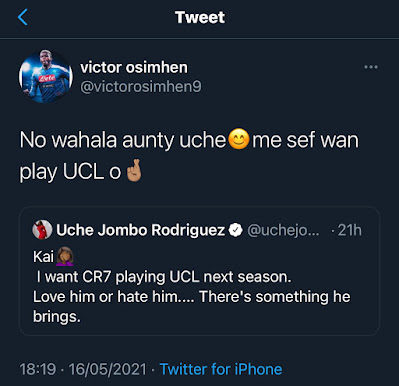