Ndidi and Iheanacho celebrated their win by displaying Nigerian flag for their first ever FA Cup title for Leicester.

However, Kanu reacting on his Twitter page described their action as shameful.

According to him, it shows the players do not support his agitation for the state of Biafra. 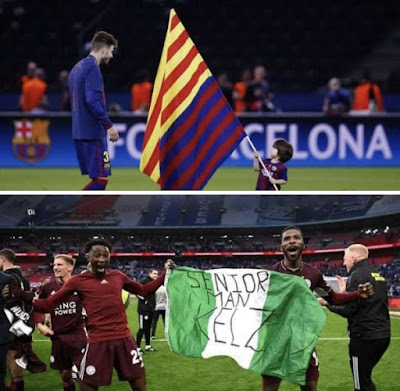 Displaying the picture above, Nnamdi Kanu wrote: ”Gerard Pique is a World Cup winner with over 103 caps for Spain. He never turned his back against Catalonia freedom.

“Severally, he has shown open support for Catalan freedom.

“But our Iheanacho and Ndidi with Nigeria flag? Shame! Difference between White man and his Black counterparts.”