Welcome to another Legislative Day in the Abia State House of Assembly.

The Abia State House of Assembly commenced plenary after the adoption of Votes and Proceedings of Monday, 5th July, 2021.

The Speaker of the House, Rt Hon Engr Chinedum Enyinnaya Orji announced to the House that Mrs Nkechi Ikpeazu PhD, the First lady of Abia State will soon be with them in plenary today for an advocacy visit.

H.A.M. 16: Motion for the urgent intervention and immediate reconstruction of some roads in Aba South State Constituency.

The sponsor of the Motion, Hon Obinna Ichita Martin, Member representing Aba South State Constituency explained to the House the urgent intervention needed on the dilapidated roads in his immediate constituency.

He said one of the core responsibilities of every government is the provision of infrastructure: “Roads open up and stimulate economic activities which bring about economic growth, development and enhancement of the well-being of the people, good roads also provide the people access to healthcare, education, jobs and markets which are crucial in the fight against poverty”.

He further said the state of some major roads in his Constituency which include Port-Harcourt, Omuma and Obohia hamper economic activities in the said areas.

Hon Ichita further said the urgent intervention of the State Government on some of the roads in his Constituency that are in morbid state will not only alleviate the sufferings of his constituents but also bring succor to multitude of them.

He therefore prayed the Honourable House to resolve as follows:

1. That the House while commending the Governor for the roads already reconstructed in Aba should implore him to order the contractors handling Port-Harcourt, Omuma and Obohia roads back to site without further delay in order to alleviate the sufferings of constituents in the said areas.

2. That the House do mandate Ministry of Works to liaise with Office of the Member representing Aba South State Constituency to identify and commence the immediate reconstruction of at least 3 kilometers road along the Uratta axis of Aba South Constituency.

3. That the House do urge it’s compliance Committee to ensure that resolution as contained in the motion are strictly implemented by the State Government.

The Speaker, Rt Hon Engr Chinedum Enyinnaya Orji said the House will leverage on the prayers of Hon Obinna Ichita. He mandated the Ministry of Works to liaise with the contractor handling the road projects to speed up work since work had since commenced on the affected roads.

Presentation of the Report of the House Committee on Local Government and Chieftaincy Affairs on the petition titled “Reports of Irregularities during the supposed plebiscite for the Ezeship of Ibeku Ngwa Amaise Autonomous Community, a call for cancellation and demand for a fresh plebiscite”.

Hon Solomon Akpulonu, Majority Leader and Chairman House Committee on Local Government & Chieftaincy Affairs read out the report and recommendation of the committee as follows:

That the Ezeship tussle in Ibeku Ngwa Amaise Autonomous Community started in 2018 after the one year mandatory mourning of her late Traditional Ruler, HRH Eze Silas Onyenso.

That the non indication of interest of the said second and third villages in order of seniority in the Ezeship stool prompted Ejike Alozie who hails from the same village and kindred as the late Traditional Ruler to indicate interest and pay the requisite fee to the Ministry of Local Government & Chieftaincy Affairs.

That sequel to the development, Umuagwu village which is the fourth in order of seniority among the villages in the Autonomous Community presented Blessing Ikpendu as her Ezeship candidate in accordance with the provisions of the Constitution of the Autonomous Community and he also paid the requisite fees to the Ministry of Local Government and Chieftaincy Affairs.

That all efforts by the Traditional Prime Minister/Regent of the Community, Mr Sampson Uruakpa and the President General, Grant Anyauwanna to broker peace by requesting Mr Ejike Alozie to step down in order to respect the provisions of Section 7 (2) of the Constitution of the Autonomous Community ended in a debacle

That to resolve the Ezeship tussle, a plebiscite was conducted on 30th April, 2021 with the Permanent Secretary, Ministry of Local Government & Chieftaincy Affairs, and the Chairman, Osisioma Ngwa LGA in attendance.

That due to obvious interest, the said plebiscite was allegedly marked by irregularities with Ejike Alozie emerging as the Eze-Elect of the Community.

That the emergence of Ejike Alozie as the Eze-Elect contrary to the wish of most members of the Community caused pandemonium resulting in a barrage of petitions and protest.

That in view of the controversies that surrounded the outcome of the plebiscite conducted in the Autonomous Community on 30th April, 2021, that the House should as a matter of necessity nullify the said plebiscite and mandate the Ministry of Local Government and Chieftaincy Affairs to conduct a fresh one.

Presentation of the Report of House Committee on Public Accounts, Anti Corruption and Due Process on the petition titled “Embezzlement of Funds earmarked for the establishment of the Abia State Micro Finance Bank by the State Committee on Small and Medium Scale Enterprises (SMEs) was deferred to be considered on another Legislative Day.

COMMITTEE OF THE WHOLE

In a motion moved by the Majority Leader, Hon Solomon Akpulonu and seconded by Hon Mike Ukoha, Member representing Arochukwu State Constituency, the House dissolved into the Committee of the Whole to consider H.A.B. 40: A Bill for a Law to Establish the Abia State Accounts Allocation Committee (ABSAAC).

After consideration of the Bill in the Committee of the Whole, and in a Motion moved by the Majority Leader, Hon Solomon Akpulonu and seconded by Hon Mike Ukoha, the House reverted back to full plenary.

In a Motion moved by the Majority Leader and seconded by Hon Mike Ukoha, the Order Paper was amended to accomodate the Third Reading of H.A.B: 40.

Reporting what transpired at the Committee of the Whole, the Speaker said, “At this point, having crossed the t’s and dotted the i’s, we can comfortably delete the word ‘Bill’ and insert the word ‘Law’ in its place.

“This Law can be cited as the Abia State Accounts Allocation Committee Law; and will come into force this day 13th Day of July, 2021”, the Speaker said.

Subsequently H.A.B. 40 was passed into Law.

Consideration of H.A.B. 6: A Bill for a Law to Establish the Abia State Consumer Protection Agency;

Consideration of H.A.B. 23: A Bill for a Law to Establish the Abia State Commission for the Welfare of Disabled Persons, were all deferred to be considered on another Legislative Day.

In a motion moved by the Majority Leader and seconded by Hon Mike Ukoha, the House dissolved into quasi plenary to interact with Dr Nkechi Ikpeazu, First Lady of Abia State who came on an advocacy visit.

The Speaker, Rt Hon Engr Chinedum Enyinnaya Orji welcomed the First lady and her Entourage to the hallowed Chambers.

The First lady thanked the House ably led by Rt Hon Engr Chinedum Enyinnaya Orji for being proactive in their Legislative affairs and commended them for passing into Law so many Bills which directly affect children and women.

She said the Bills are people oriented and will have greater positive impact on children and women of Abia State.

She then requested that the House review the Child Rights Law passed in 2006.

She also requested that the House give attention to the Widows and Disabled Persons Bills.

She thereafter presented documents containing her proposals to the House through the Speaker.

The Speaker thanked the First Lady for finding time to come on what he termed “all important advocacy visit”, saying it proves that Dr Nkechi Ikpeazu is fully committed to help enhance and improve the welfare of women in the State.

The Speaker said the First Lady had played a huge role in the last six years in the areas of empowering women especially widows and the less privileged in the society.

“It will be to your credit that in your time, Bills that are people oriented were passed into Law; you have been so outstanding and have mount pressure on the Assembly to pass Bills that positively affect women and children into Law,” the Speaker said.

The Speaker promised that in the next couple of weeks, the House will pass the Persons with Disability Bill into Law as requested by the First Lady.

He thanked her for coming to the Chambers and prayed that God will continue to sustain and give her wisdom to discharge her duties.

The Governor’s Wife was accompanied on the advocacy visit by the Wife of the Deputy Governor, Lady Vivian Ude Okochukwu. 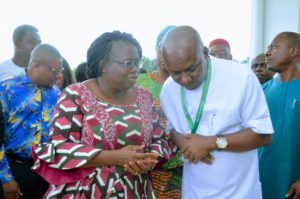 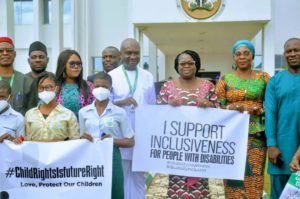 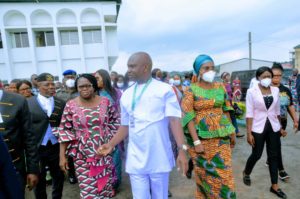 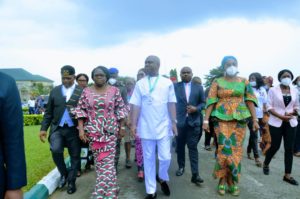 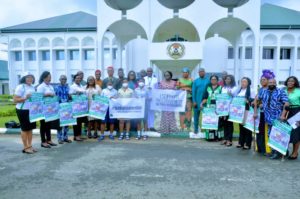 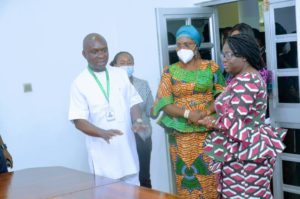 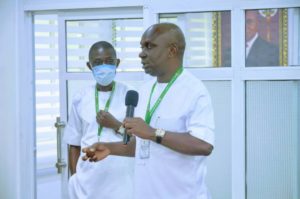 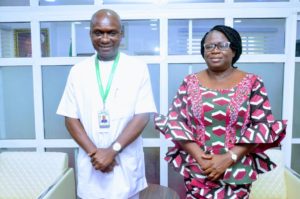 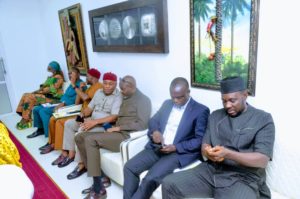 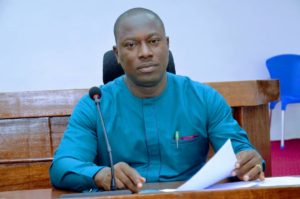 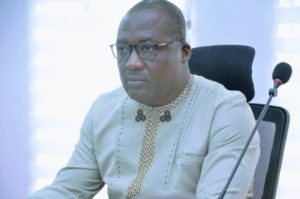 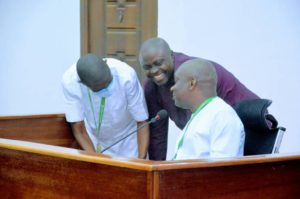 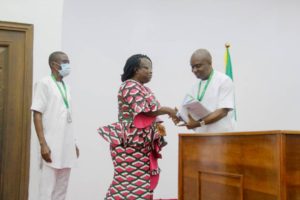 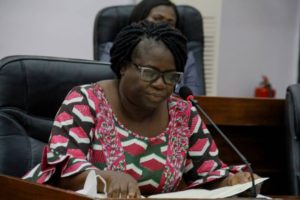 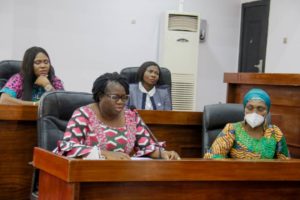 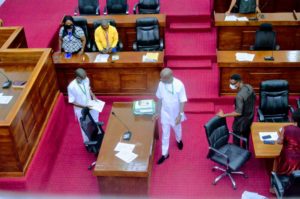 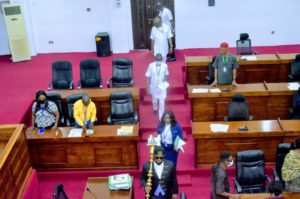 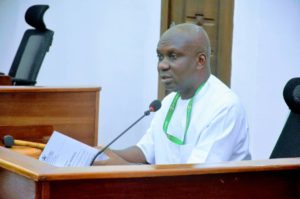